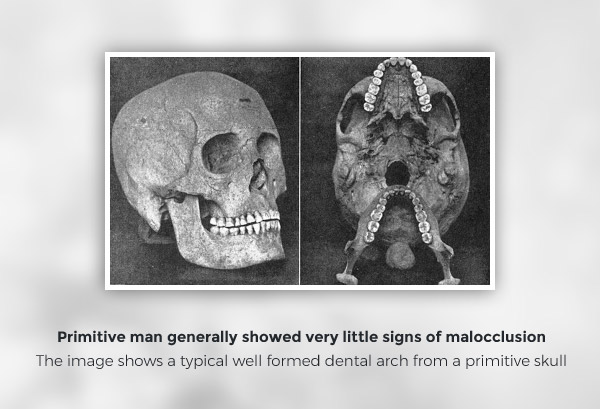 What are the Causes of Malocclusion?

It is widely accepted that the teeth and jaws are at the mercy of the muscles of the lips, cheeks and tongue, and that “soft tissue dysfunction”, or aberrant swallowing (and breathing) patterns are the major cause of malocclusion. (Soft Tissue Dysfunction: a missing clue when treating malocclusions. German O. Ramirez-Yanez, Chris Farrell. International Journal of Functional Orthopedics. 2005)

Any factor that leads to either soft tissue dysfunction, or breathing dysfunction, may therefore lead to malocclusion.

Why is it that malocclusion is on the rise?

There is no doubt that malocclusion has risen since more primitive times.

It appears that malocclusion appears to be related to environmental factors. The fact that wild animals and more isolated populations of human beings do not exhibit much (if any) malocclusion (Weston A Price- Nutrition and Physical Degeneration) indicates that it is likely to be linked to our modern way of life.

It appears that it is a multifactorial syndrome which has come about due to one or more of the following factors (plus other factors that have not been listed) which are all related to our modern ways of living and cultural tendencies. Essentially, the introduction of anything that leads to aberrant swallowing patterns, poor posture, or dysfunctional breathing will exert some effect on the incidence of malocclusion.

Below are 10 factors that happen more in modern times, than in more primitive times which might explain why malocclusion may be on the rise:

1. Use of sedatives such as pethidine during labour

Maternal use of any sedative during labour causes effects on the newborn infant. Pethidine half life is much greater in a neonate than a mother (13 hours compared to 30 minutes). Thus, the infant spends some their first day under the influence of sedation. It has been shown that this has an effect on the infant’s ability to learn to suckle properly and so establishment of proper swallowing (and breathing) patterns becomes difficult. The first 20 minutes post-partum has been shown to be the most important time to establish proper suckling. Correct or incorrect early suckling patterns were shown to be of prognostic value for the duration and success of breast feeding. Proper breast feeding helps to establish proper swallowing patterns. (Lancet 1990; 336: 1105-07. Effect of delivery ward routines on success of first breast feed)

2. Separation from the mother’s skin immediately after birth

The Lancet study named above also showed that separation from the mother’s skin prior to the onset of the first feed negatively affected the infant’s ability to suckle correctly. In fact the combination of pethidine with separation from the skin had the most deleterious effect.

3. Use of pacifiers during early childhood

Pacifiers (dummies) cause the infant to learn to swallow in a dysfunctional manner and therefore, increased use of pacifiers would lead to increased malocclusion (see causes of malocclusion).

4. Use of bottles during feeding

Bottles have a similar effect to pacifiers, in that they have the potential to alter normal swallowing patterns.

5. Mothers being too tired to feed infants easily

It is not uncommon in our modern world for our mother’s to be managing multiple commitments. Modern mothers often take on more than just mothering and have to run the home as well as a business, or full time job. Mothers are likely to be more tired than they used to be and many tell stories of having to breast feed while they are half asleep and feeling incredibly stressed.

At times tiredness from modern pressures makes them get sick or have difficulties with lactation.

When vets tell us to give bones to our puppies so they can develop proper masticatory muscles and grow strong jaws they are giving us sound advice. Compare this to the common foods eaten by young babies, and it’s clear to see that we typically feed our young soft foods, that are more sucked than chewed. Primitive populations had a harder diet compared to the sloppy nutritionally devoid foods that we often feed our modern babies and this allowed more primitive populations to develop proper swallowing patterns and stronger masticatory muscles, which in turn led to well formed jaws. (Weston A Price – Nutrition and Physical Degeneration)

Prior to refrigeration, and preservatives, foods were mostly fresh, seasonal and diverse. Nowadays, foods can be months, or even years old by the time we eat them. Furthermore, the food industry has altered our food sources to enable longer shelf life and higher yield. Whilst this has it’s advantages, it certainly comes with a health warning. One example of such a modification is in cow’s milk. There is a substantial body of evidence to support theories that proteins such as casein in milk may be major causes of allergy and congestion. Consumption of high volumes of cow’s milk products is a modern phenomenon. Propaganda relating to it’s benefits is supported by the huge marketing budgets of the dairy industry, and it is worth considering that we are the only species that drinks milk after infancy, and certainly the only species that drinks the milk of another species. (Hill et al Clinical Manifestation of cows milk allergy in childhood the diagnostic value of skin tests and RAST Clinical allergy 1988; 18; 481-490.) (Stricker T et al Constipation and intolerance to cows milk J Paed Gastroenterology and nutrition 2000;30;224)

The fact is that a food that has been refined in any way, has a greater chance of having poor nutritional content, than a completely fresh, seasonal, chemical free version. Moreover, the lack of diversity in our diet puts us at further risk of being over-fed but undernourished. This malnourishment is linked to an increased frequency of illnesses. In 10 years from 2001 to 2011, there was a five fold increase in anaphylaxis from food allergy. (J Allergy Clin Immunol 2011 127:688-76)

However, illnesses may range from the common cold, to ADHD, to congestion and diabetes. Since illness often leads to a blocked nose and open mouth posture, it goes without saying that it may lead to malocclusion. A child who is often sick with a blocked nose, and open mouth posture will be more likely to exhibit a vertical growth pattern. The tongue is supposed to be free to sit up high in the palate and stimulate proper growth of the maxilla. Mouth breathing due to sickness, or congestion leads to low tongue posture.

Modern children are future chiropractic time bombs. Poor posture is a major symptom of a comfortable and sedentary lifestyle. Watching TV, or playing on computer games whilst sitting on a beautiful soft leather sofa might be fun. However, it is a recipe for poor core strength, a subluxation of the neck and resultant poor posture. Since posture affects breathing patterns and growth direction, it is likely to affect malocclusion formation.

Modern humans are over stimulated compared to their more primitive counterparts. Exposure to screen technology past the hours of darkness, such as TVs and I-pads may lead to poor sleep due to suppression of the sleep hormone melatonin. (Lighting Research Center at Rensselaer Polytechnic Institute)

All of the above have the potential to excite the “fight or flight” sympathetic autonomic nervous system. Prolonged and frequent excitation of this is likely to lead to increases in breathing dysfunction since increased respiration occurs during such events. This increased respiratory drive on a frequent basis may lock the child into a pattern of “over-breathing” or “habitual hyperventilation.” When this happens the Minute Volume (volume of air breathed per minute) at rest increases. Once this becomes the norm, an open mouth posture and habitual mouth breathing occurs to allow the bigger volume of air to be breathed. Open mouth posture and low tongue posture effects craniofacial growth and jaw development.

Why is there a need for an effective early interventional approach?

Malocclusion is not just about the teeth. The teeth are simply a symptom of an overall “syndrome”, and are merely the tip of a very large ice-berg. Jaw growth occurs throughout childhood with the majority of growth being completed before the permanent dentition is fully erupted.

Achieving close to the maximum genetic potential for growth of the maxilla and mandible are not just important for straight teeth. These bones make up parts of the face, and are gateways to the airway.

Waiting for all the teeth to erupt until age 12 or 13 is condemning the child to a face that is potentially less symmetrical, and an airway that is potentially smaller than it might otherwise have been. For these reasons alone, it makes no sense to isolate the problem to the teeth, and only act in the best interests of straight teeth.

Previously, “phase 1 pre-orthodontics” has been rejected by some due to the potential for relapse while waiting for the final eruption of the permanent dentition. However, many of the systems used for phase 1 have not focused on changing the myofunctional patterns at the same time as expanding the jaws and aligning the teeth. A better system would involve both correction of myofunctional causes, and active expansion and alignment where necessary. Or better still, in the case of an oral restriction such as a tongue tie, early correction using an inter-disciplinary approach as recommended by the Tongue Tie Institute.

The fact that malocclusion is more than just crooked teeth, suggests that a system which works on all aetiological factors and co-morbidities of malocclusion is preferential. Therefore, involvement of a team of professionals working to establish proper function is a better approach. This team may involve the following professions:

So what should be done if malocclusion is suspected?

Early diagnosis and intervention is essential for complete treatment, so refer to a dentist or orthodontist who focusses on “Pre-Orthodontics”. Not all practitioners are the same and often have different training with exposure to different philosophies and modalities. Given that malocclusion is linked to dysfunctional swallowing and breathing patterns, and given that it is not just a problem for the teeth – it’s a growth disorder – referral to a dentist or orthodontist who focusses on establishing proper growth as early as possible is essential.Do not accept a treatment plan which involves monitoring every 6 months until all the teeth have erupted. These plans are only given out by practitioners who only see the problem as a problem for the teeth. The jaws need growing now and the dysfunction needs correcting immediately.

How can malocclusion be reduced or prevented?

03 9329 2929
Practice Information
Myofocus Melbourne
Suites 1 & 2
Level 1
33 Flemington Road
North Melbourne VIC 3051
OPENING HOURS
Our opening hours are Monday to Thursday 9am to 5pm and Friday 9am to 1pm. Closed on Saturday, Sunday and Public Holidays. Please email us on info@myofocus.com.au if you need to contact us.
BOOK A CONSULTATION
If you are having any questions regarding our services, please contact our friendly team today
BOOK APPOINTMENT